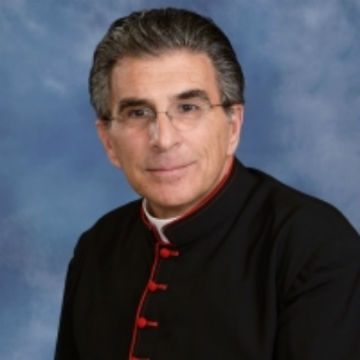 Monsignor Frank Chiodo was born and raised in Des Moines in a family of four siblings. After graduating from St. Anthony grade school and Dowling High School he attended Conception Seminary in Missouri in 1974 he was awarded a Master of Arts degree in Moral Theology from St. Thomas Seminary in Denver, Colorado.

Ordained in 1976, he has served many parishes as pastor – from Leon and Chariton, Iowa to St. John Basilica and Holy Trinity in Des Moines to St. Thomas More in Omaha. He was named a Prelate of Honor with the title of Monsignor in 1990 by Pope John Paul II.

He has authored three books, Cross Your Heart and Hope to Live, One Dose Daily, and What the Senses Fail to Fathom. Has a radio program weekly on KWKY and the same program is telecast weekly on the local cable channel. The program is called, "The Heart’s Treasure." A series of CDs are available which provide a variety of homilies and reflections. Some of these are entitled, "The Power of Faith," "The Power of the Cross," and "The Power of the Eucharist."