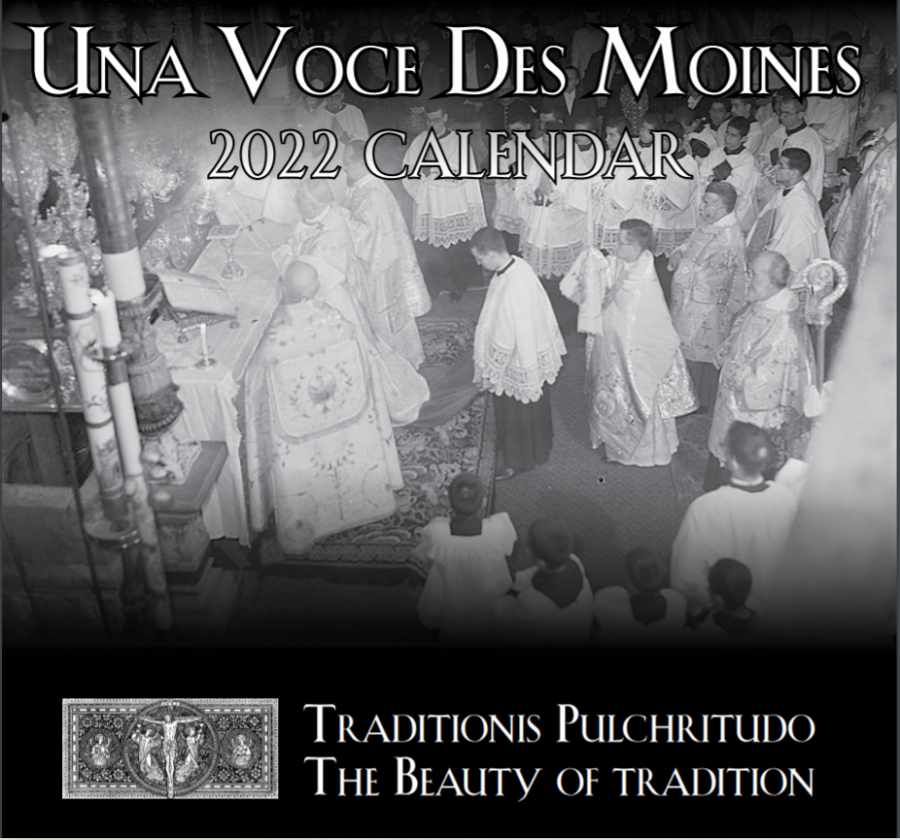 The unique 11′′ x 11′′, card stock cover calendar contains high quality images of Traditionis Pulchritudo, The Beauty of Tradition, as well as the Feast Days for both the Ordinary and Extraordinary Form.

To order or purchase a calendar, go to: unavocedsm.org 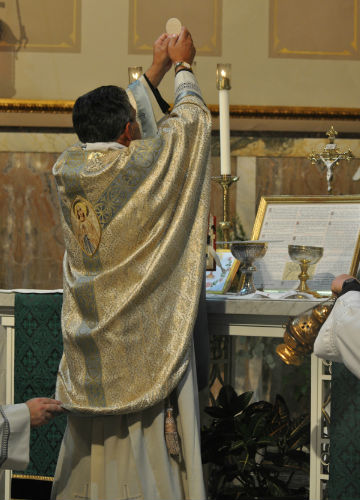 The Extraordinary Usage of the Mass of Roman Rite

“In parishes, where there is a stable group of faithful who adhere to the earlier liturgical tradition, the Pastor should willingly accept their requests to celebrate the Mass according to the Rite of the Roman Missal published in 1962, and ensure that the welfare of these faithful harmonizes with the ordinary pastoral care of the parish, under the guidance of the Bishop, avoiding discord and favoring the unity of the whole church.” (Pope Benedict XVI, Motu Proprio, Summorum Pontificum, Sept. 14, 2007.)

The ancient form of Holy Mass follows the same general outline as the “Novus Ordo” or Mass of Paul VI, promulgated after the council.

Some things to take note of:

We don’t just sing at Mass, the Mass itself is sung. The Kyrie in Greek, Lord have Mercy. The Gloria, the Creed, the Sanctus or Holy, Holy, the Agnus Dei or Lamb of God. Hymns may be added after or before the Mass, or special one sung at the offertory and communion.

Participation in the Mass is emphasized in our singing the chants, responding to the priest, attentively listening to the word of God, which will be proclaimed in English after the Latin.

The beginning Rite of Mass takes place at the Altar steps with special preparatory prayers, found in your booklet.

--The opening prayer, collect, epistle and response are said at the right side of the altar. The Gospel is proclaimed on the left side.

--The offertory rite is prayed silently as is the Eucharistic prayer or canon. The words are found in your booklet.

--The priest with the congregation faces the same direction.

The priest is not placing his back to the congregation as much as facing the same direction, leading the congregation at its head—as if in a great procession towards heaven led by the priest. Together we face the coming kingdom of God.

The “Our Father” is sung out loud. You are invited to join in this too.

The concluding prayers are prayed on the right, as were the opening prayer and epistle.

We conclude with a blessing, and the silent praying of the last Gospel.

The texts for the Mass, except the readings of the scripture are in your booklets. The chants are at the back of your Mass book.

“The Roman Missal of Pope Paul VI is the ordinary expression of the Law of Prayer of the Catholic Church of the Latin Rite. Nonetheless, the Roman Missal promulgated by Saint Pius V and reissued by Pope John XXIII is to be considered as an extraordinary expression of that same Mass, and must be given due honor for its venerable and ancient usage. The two expressions of the church’s prayer will in no way lead to a division in the church’s prayer or belief system. They are, in fact two usages of the one Roman Rite.” (Words of Pope Benedict in his Motu Proprio, Summorum Pontificum.)